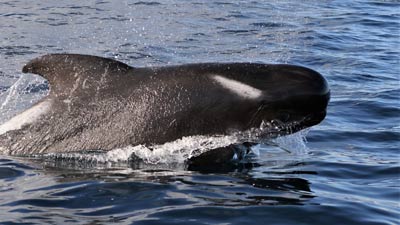 Our pilot whale research emerged from our false killer whale work, which showed that the two species associate at times. A photo-identification programme was initiated in 2007, focusing on site fidelity and social structure. To date, pilot whale research in New Zealand has focused predominantly on stranded individuals. Our ongoing programme is the first study of free-ranging pilot whales. A genetics programme was added in 2015 and acoustic research will be initiated in 2017. Both long and short-finned pilot whales occur in the study area, with the latter only sighted on rare occasions during warmer months. Long-finned pilot whales occur in the study area year-round but appear to be more frequent during summer and autumn. While we have been able to document site fidelity in the study area, our findings to date suggest that a large and far-moving population is likely. Long-finned pilot whales are the most numerous cetacean to strand on New Zealand shores, with dedicated government and community initiatives in place to attempt refloating of stranded individuals. The causes of strandings remain poorly understood and are subject to debate. Our research contributes to a better understanding of stranding scenarios by comparing our at-sea observations with those from strandings. Confirmed at-sea sightings of stranded individuals before or after stranding events will answer important questions regarding their habitat use and survivorship.