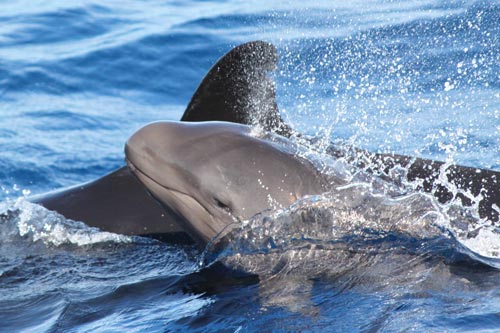 The false killer whale remains one of the lesser known cetaceans. Our ongoing false killer whale research started in 2005, investigating population dynamics using photo-identification. It is the first and only study of the species in New Zealand waters and one of only a handful worldwide. Our research to date suggests the possibility of a small local population off north-eastern New Zealand.

All individuals identified so far are linked by association in a single but clustered social network. Site fidelity is evident albeit with a strong seasonal component. False killer whales also appear to form a permanent association with oceanic common bottlenose dolphins in the study area. Standard group formation benefits such as improved foraging, predator evasion and/or social stimulus are thought to play a role. The interspecific associations between these two species and with pilot whales are the subject of ongoing behavioural research. To answer questions regarding the identity of the individuals occurring off north-eastern New Zealand, the research programme has been extended to include genetic sampling carried out in association with Massey University and acoustic research in association with Otago University. Through our own field work and our expanding sightings network, a picture of habitat use in near-shore waters is starting to emerge. As false killer whales are not present in the study area during winter and spring, we are in the process of raising funds to initiate a satellite-tagging study in conjunction with Auckland University. Satellite-tagging will help to identify home ranges and year-round habitat use patterns.

Our research provides an important contribution to our knowledge of the species not only in New Zealand but also on a global scale. Through collaboration with scientists involved in false killer whale research programmes in other parts of the world, we can put our work into a global context and further increase our knowledge of this little-known species, its conservation needs and the resulting management implications.